This piece was first published by the Community Development Investment Review, a publication of the Federal Reserve Bank of San Francisco.

Five years ago, Investing in What Works for America’s Communities was enthusiastically welcomed by community development practitioners. A million social media hits, 60,000 copies out, four more books and dozens of conferences later, community development’s intellectual pursuit found a natural expression. Today, with five years of hindsight, it’s fair to ask: what would we do differently? What would we add to our original vision?

I can answer that without ambiguity: I would add racial and gender equity more thor- oughly into our vision, our paradigm and our practice. This is no small thing. When we wrote What Works, we got a lot right. But, we left a hole in our vision by failing to include an equal focus on racial inequity, and the laws, traditions and institutions that support it.

Today, I would say to my colleagues: It doesn’t matter how many houses we build, how many billions of dollars we invest in transforming communities, how many schools we finance, or child care centers we support or jobs we create. If the people living in these communities wake up in the morning, knowing that society is tilted against them, the power of our work is undone. If the people we set out to help live 24 hours a day, seven days a week uncertain that they can trust society, uncertain they can count on civil institutions, laws, their fellow citizens for fair treatment, our investments are undone. We cannot achieve our mission of poverty alleviation without simultaneously including a focus on the system of laws, rights, institutions and social practices that condemn most of those we work with to second class citizenship and a lack of opportunity.

What Works called for people and place integration. Today, I would make that a three- legged stool: people, place and justice. How we go about adding this third leg is the work of the next decade in our field. 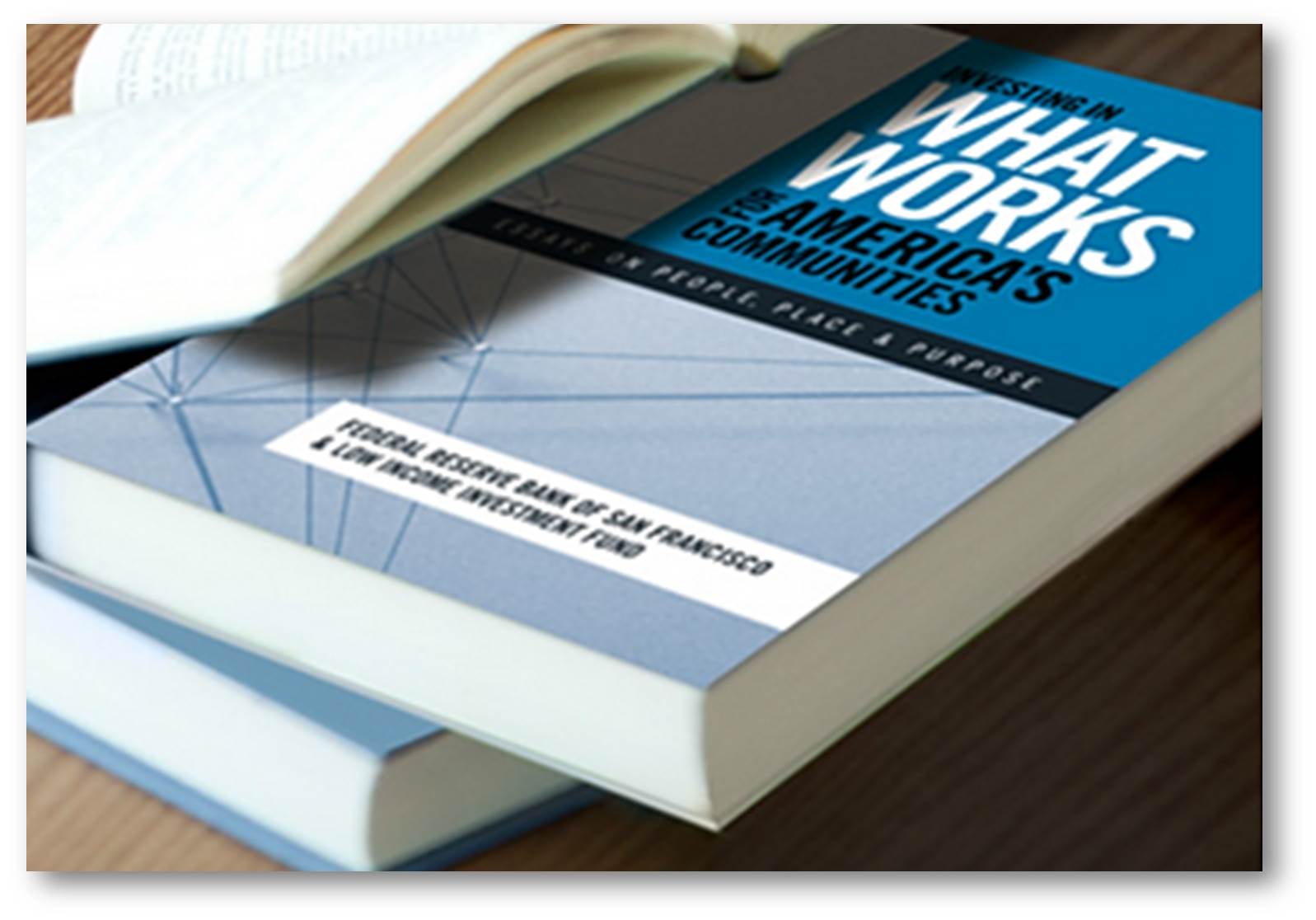 In 2012, we gave voice to a paradigm shift that had been dawning across the field. We said that the age old debate between people and place based strategies was over, and both sides had won. We criticized ourselves, arguing that community development had focused too much on place alone, leaving people out of the equation. Even then, we understood (but failed to point out) that this was rooted in sexism. Community development had become mesmerized by the buildings we invested in, by the ‘muscular’ vision of investing for economic growth. The ‘soft stuff,’ the social supports so deeply associated with women and female leadership – like child care, early learning, education, basic social services – were seen as second class, second to the more important business of changing economies. Pulling a page from classical economics, some of us even saw human capital strategies as dependency creating.

But science was rapidly proving that the soft stuff mattered just as much, if not more, than economic determinism. Even back in 2012, when What Works came out, some of us understood (but were hesitant, even fearful, to articulate) the impact of gender inequality in the community development paradigm. But we failed to draw a line between this and race, as well as the broader system of fair laws, rights, and institutions.

Community development grew out of the civil rights movement in the early 1960s. Improving local economies through investments in jobs, neighborhoods and basic services seemed like a natural partner to the cause of equality and justice. But, it was probably inevitable that a division of labor would naturally arise between the part of the movement that focused on laws and rights, and the part of the movement that focused on community organizing, community investing and community building. The necessary division of labor led to a series of splits among practitioners – and over time, the splits yawned into chasms. The splits arose between those who focused on investing in the built environment (community development), those focused on investing in human capital (social services) and those who advocated for equal treatment by laws and institutions (civil rights organizations, legal services, the national law projects). And over time, the agendas of these broad groups diverged to the point that it was not always clear we were each other’s natural allies.

Let me be clear: the work we do in community development changes lives. Investing so that a child can go to school, not prison, changes his life—for good. Investing in homes that create safer neighborhoods means that families feel more secure at night, so that parents and children stay healthier, can get up in the morning to go to work and school. This changes the world—for good. It creates real value for all of us. But it is not enough. We, in community development, can do a better job of integrating rights and justice into our everyday work, into our program strategies and our annual work plans.

LIIF is putting social justice at the heart of everything we do, and it changes the way we work toward mission. There remains much discovery before us.

My organization, the Low Income Investment Fund, has been driving down this path for a couple of years now. For us, it has meant a complete re-thinking of our programs and goals. We are worried about the cost of good intentions in how we historically have conceived of our programs. We have come to believe that many of our traditional ways of working inad- vertently promote discrimination and segregation. Ours is still a work in progress, but so far, it has meant opening up to new ways of working. We are embracing a ‘both/and’ approach:

LIIF is putting social justice at the heart of everything we do, and it changes the way we work toward mission. There remains much discovery before us.

In 2013, then President Obama urged us to think back 50 years and remember what was going on in Selma, in Watts, in Chicago, in Detroit. We can think back and feel proud of the progress we’ve made in 50 years, and how far we’ve come as a society. But the news coming from Charlottesville, Ferguson, Baltimore, Charleston, Cleveland and every major city in the United States reminds us that we cannot stop. In 2016, Matt Desmond’s Eviction shined a harsh light on the overwhelming, systemic unfairness in the way laws and rules can be used against poor women and their children, of all ethnicities, pushing them into homelessness and desperation. We should be proud of how far we’ve come in 50 years. But in 2017, we have much more work to do.

In the long run, we all lose from a tilted system. The United States exists in an increasingly competitive global economy, and we need every mind to work at its highest potential, we need every spirit to be nourished, not blemished, by racism or sexism. We all do better when there’s a fair deal on the table; when everyone has a fair shot at reaching their full potential. For those of us in community development, we need to find better ways of adding these insights into our programs, strategies and practice. We need to bridge the chasms that formed naturally as we pursued the vision of the War on Poverty. Just as Investing in What Works urged us to integrate people with place, we must integrate justice more deeply into our work.

Nancy O. Andrews is the President and CEO of the Low Income Investment Fund