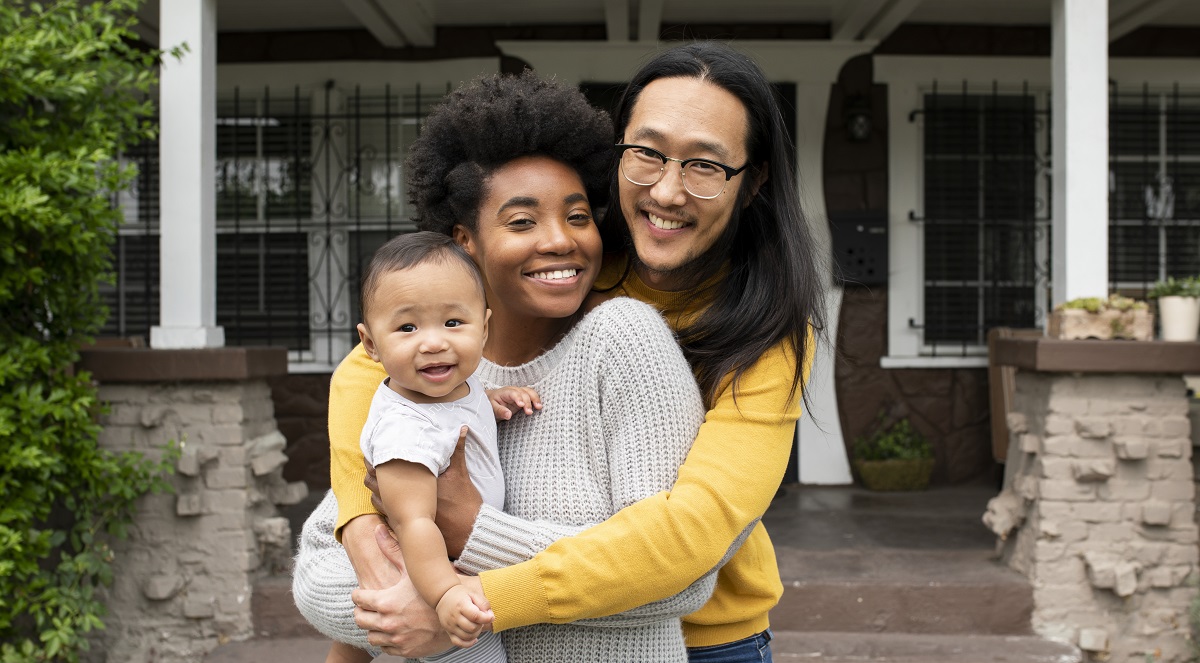 On the heels of the greatest health crisis our nation has seen in a century, there has been an avalanche of near and present crises: an unemployment crisis, a care and education crisis, and looming eviction and displacement crisis. The cascade has reached the base of the mountain, threatening the most foundational requirement to human health and well-being: a safe, affordable place to call home. We see the stark reality confirmed not just in stories from our communities, but in the nationwide data: In December 2020, researchers predicted up to 40 million evictions across the country. Since then, a federal eviction moratorium was expanded to January 31, 2021 along with $25 billion in rent relief, but loans are expected to be paid back in full and unemployment benefits will eventually expire.

While the financial impact of the pandemic is felt across demographic groups, we recognize that people of color are bearing an unequal amount of the burden. “The State of the Nation’s Housing 2020” report out of Harvard University shows that Black and Hispanic renter households in particular were twice as likely as white renter households to be behind on housing payments and twice as likely to report being at risk of eviction.

We know that stable, affordable housing is a pathway to closing the wealth gap, providing stability, and improving outcomes for generations of families. We also recognize that housing has long been an arena of racial discrimination leading to inequitable access for people of color. As we look to recovery, there is immense work to be done to preserve affordable housing and to advance the building of more quality homes. LIIF is tackling this work from several points. We have renewed our commitment to affordable housing as a pillar of our work to advance racial equity within our strategic plan. We advocate at the federal level for fair housing practices and policies that support affordable housing development. And we invest in community solutions to create and preserve quality, affordable homes.

While housing challenges present themselves uniquely across cities and communities, we can draw lessons from past successes and use models as a starting point to address neighborhoods’ unique needs. Below, we explore how innovative partnerships and funds are combatting divestment on the South Side of Chicago, gentrification and displacement pressure in Oakland, CA, and Atlanta, and growing homelessness rates across Los Angeles.

The sprawling South Side of Chicago is home to the University of Chicago, dozens of parks, three major league sports teams ― and extreme disparities in wealth. In the South Works neighborhood and nearby city of Harvey, IL, the booming steel industry of the early 20th Century once employed tens of thousands of people, but the region has since experienced decades of divestment, redlining, racial segregation and inequitable resource allocation leading to food and transportation deserts and a paucity of jobs, healthcare facilities and pharmacies.

These neighborhoods have long housed mostly Black residents ― and many Mexican residents ― who worked the steel mills and in manufacturing starting during WWI and raised families in the ensuing generations. Today, the average annual income in these neighborhoods hovers around $10,000 (Harvey, IL) and $17,000 (South Chicago), well below the $36,000 average in Chicago’s metro area according to census tract data.

Gentrification and displacement are not yet current threats to these communities, presenting an opportunity to strengthen and stabilize currently affordable housing for the long-term. The Fund to Preserve Affordable Communities (FPAC) recently provided Preservation of Affordable Housing (POAH) with $21.6 million to acquire a 101-unit apartment building in South Chicago and a 120-unit apartment building in Harvey. Both properties are a critical source of affordable housing and recreation space for low-income and disabled seniors in the Chicago metro area.

South Chicago Elderly Housing was originally built in 1925 and underwent major renovations 40 years ago. The FPAC loan will allow POAH to hold the property until they can secure financing for renovations including a new roof, heating system and development of a health and wellness facility. South Suburban Elderly Housing was built in 1946 and the loan will cover the partial replacement of the roof, energy efficiency updates and a potential build-out of an adult day care, while residents remain in their units.

Investing to improve the quality of affordable homes is a strategy for keeping people housed and safe and for attracting commercial and community development projects like schools, bus lines and job centers. FPAC is a $100 million fund to make flexible financing available to non-profit developers and members of Stewards of Affordable Housing for the Future (SAHF), enabling them to acquire, stabilize, and preserve the long-term affordability of housing.

The fund laid the groundwork for a joint venture, launched in 2020 among LIIF, SAHF and NAHT. Together, the organizations will work to raise $1 billion over the next five years of the partnership to build, protect and preserve approximately 10,000 affordable homes across the country.

The crucial role of public funding

The will of the public behind state and local officials is another enormous resource for propelling affordable housing developments forward.

In the city of Los Angeles, an estimated 41,000 people live on the streets, in shelters and in vehicles — a  number that has doubled in two years. While thousands of people are successfully housed each year, a greater number are losing permanent shelter, highlighting a need to both build and preserve affordable housing. In 2016, voters passed a $1.2 billion bond (from a quarter-cent sales tax) aimed at adding 10,000 units for unhoused Angelenos across the city.

LIIF was able to move the City’s housing pipeline forward by leveraging bond funding with our own $36 million investment in 17 projects in Los Angeles, which will create or preserve 1,206 affordable homes, including 815 supportive housing units, many of which serve veterans, seniors and other underserved populations.

(RISE Apartments was one of 17 housing projects funded in part by LIIF and City of Los Angeles bond funding. Studio apartments start at less than $500/month, less than half the City’s average rent.)

In Atlanta, Mayor Keisha Lance Bottoms has similarly rallied her city behind the need for more housing, campaigning in 2017 on a platform to invest $1 billion in affordable housing to create 24,000 new homes. Since that time, Invest Atlanta, the city’s development authority, launched its inaugural program, the Atlanta Equitable Transit-Oriented Development (eTOD) Fund.  Based on LIIF’s strong track record of fund management and prior collaboration with Enterprise Community Loan Fund, the two CDFIs were selected to provide up to $15 million for eTOD and affordable housing developments. The pilot program is focused on providing nimble, low-cost acquisition and predevelopment capital to projects.

LIIF recently closed the first loan in the fund, providing $2.625 million alongside a $1.1 million loan from Invest Atlanta to Rea Ventures Group, LLC to finance the acquisition of what will become 42 affordable apartments, a new commercial space, medical office and retail. This site, in the Ormewood Park neighborhood, is in an area of rapid development, gentrification and displacement. The project will be the neighborhood’s first affordable, new construction apartment complex in decades.

These projects and the many to come in Atlanta and Los Angeles would not have been possible without significant public funding and the creation of tailored funds with innovative financing structures to provide fast and flexible capital to high-need projects.

Manhattan and Oakland, CA, are bustling urban centers with diverse populations and the parallel challenge of increasingly gentrifying neighborhoods. New arrivals with greater spending power push up costs in the community, which often means that longtime residents, people of color and immigrants who shaped the neighborhood are pushed out.

In Manhattan, LIIF provided a $5 million loan to Lemle & Wolff for the rehabilitation and preservation of four tax-foreclosed buildings with 91 residential units in Central Harlem. With the New York City Department of Housing Preservation and Development as a partner, the buildings will be maintained as affordable housing for the long-term. Upon construction completion and conversion to permanent financing, three of the buildings are planned to convert to co-operative ownership. The existing tenants were given the option to purchase their units for $2,500, and vacant units will be sold at prices that are affordable to households earning no more than 120% of the area median income.

This project highlights the ability of public-private partnerships to fund the renovation and preservation of existing housing stock in need of repair as affordable housing for the long-term. For example, for those purchasing their co-op apartments, monthly maintenance payments (which cover building expenses and building mortgage payments) are established at levels equivalent to rents affordable to households at 50% of the area median income, thanks to a City subsidy. The permanent loan is expected to come from the NYC Retirement Systems Economically-Targeted Investments program, which invests some of the pension funds of City employees in projects that support New York residents. Through creative financing strategies like these, tenants are not displaced, and residents benefit from the increased investments that accompany a gentrifying neighborhood.

Another tool for helping grow the wealth and housing stability of low-income individuals and families is the community land trust (CLT). In CLTs, buildings are owned by residents, but the land itself is owned by a nonprofit governed by the community, often for a period of 99 years. This model of collective ownership is more likely to ensure residents can stay in place, even through financial hardship, and that units don’t turnover quickly to the speculative market when residents leave.

Further, the CLT model holds great potential for advancing racial equity. “The historic roots of the CLT model are intimately linked with the goals of the national civil rights movement: supporting African American families to own and control land, achieve greater economic security, and fully exercise their legal voting rights without obstruction,” said Tony Pickett, chief executive officer of the Grounded Solutions Network in an interview with Housing Matters.

In fact, the first prototyped community land trust in the U.S. was established in 1969 in Georgia and ― at nearly 5,000 acres ― became the largest tract of land owned by Black people in the U.S. A 2019 study of shared equity housing performance includes evidence that CLT homes significantly contribute to family wealth creation and are increasingly serving families of color, with the potential to narrow the racial wealth gap.

To date, the SPARCC initiative, of which LIIF is a founding partner, has invested in two community land trust models in Oakland. SPARCC is currently exploring land trust opportunities across its six regional sites.

As people of color have long been systematically boxed out of the traditional financing system and excluded from wealth building opportunities, the potential for using financial tools to advance racial equity through housing is promising.

As a CDFI working to advance racial equity, we are called to continue exploring new tools and pushing forward affordable housing strategies with our partners that center people of color and create wealth building opportunities.