A safe, decent, affordable home is a key element of the American dream. The Capital Magnet Fund (CMF) is a Federal program that contributes to this vision. CMF was founded understanding that housing investments lead to stronger communities, stronger families and stronger futures. This, in turn, spurs regional and national economic growth. There is good news in a report released last week about CMF’s accomplishments.

The impact of the CMF has been remarkable, according to data released by the U.S. Treasury Department’s Community Development Financial Institutions (CDFI) Fund. Their report details the accomplishments of a single $80 million appropriation for the Capital Magnet Fund in federal fiscal year (FY) 2010. The nationwide impact of CMF grants to 23 organizations, including LIIF, is nothing short of stunning. The $80 million in taxpayer investments resulted in:

LIIF’s story is an excellent case study. To date, LIIF’s $6 million CMF grant has leveraged $146 million in other investments (a 21:1 ratio). Most important, this blend of public and private sector capital has put more than 200 people to work on 16 projects across four states, producing over 1,600 affordable rental units.

The federal government allocated another $92.5 million through CMF in 2016. LIIF was proud to receive an additional $3.7 million to deploy through the program. Once complete, the positive impact is projected to replicate the strong results of the first round. 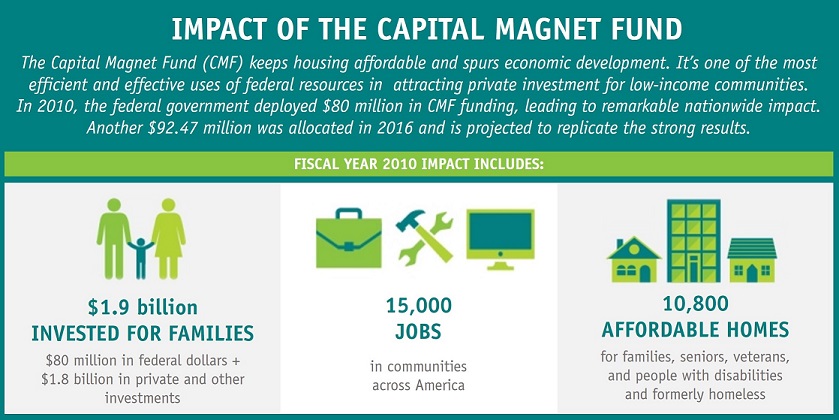 The CMF was established at an inflection point in the affordable housing and community development movement. By the mid-2000s, top-tier nonprofit developers and loan funds had achieved both scale and professionalism, establishing themselves as high quality enterprises, working for the broader public interest. They demonstrated the ability to leverage public and private capital to create affordable housing across the nation, forming able partners to all sectors working to create economic opportunity within fragile economies. But they also faced formidable obstacles.

On the affordable housing front, we lacked the kind of financing tools needed to respond in the most challenging real estate markets. In “hot” markets, nonprofit housing developers were often unable to move quickly to acquire valuable land or meet development timelines. Meanwhile, in weaker markets, it was difficult for even the most dedicated community development organizations to bring together enough local actors and public or private capital to reverse entrenched patterns of disinvestment.

Simultaneously, the leading edge of the affordable housing movement recognized that the most life-changing of affordable housing projects were part of broader initiatives that included education, health care, early childhood, healthy food access and other amenities needed by tenants and neighborhood residents. The enactment of the New Markets Tax Credit in 2000, and the field’s increasing comfort with this powerful tool, spotlighted the power of multi-faceted, mixed-use projects. But, often, CDFIs and project-sponsors were challenged to combine federal housing funding with local, state and federal programs for community facilities and economic development: rigid program requirements and timelines across these ”silos” could stymie even the most worthy project.

I was privileged to be part of a group of experienced affordable housing and community development leaders who came together to respond to these challenges. Our group soon settled on a few basic principles of program design. We eventually carried these ideas to Congressional housing champions like Senator Jack Reed (D-RI), leading to CMF’s enactment:

These elements—coupled with the tireless dedication of CDFI Fund staff and awardee organizations—enabled the inaugural set of CMF grants to succeed even as the events of the financial and economic crisis unfolded in a way few foresaw at the time of its enactment, including precipitous drop in the value of the Low Income Housing Tax Credit.

While the economy has improved substantially since the Great Recession, CMF is still critically needed. Nowhere in America can full-time workers earning the minimum wage cover the cost of a modest two-bedroom rental at 30 percent of their income – the well-established standard of housing affordability. Among households with very low incomes, the problem of affordability is staggering. The U.S. Department of Housing and Urban Development’s (HUD) Worst Case Housing Needs: 2015 Report to Congress looked at renters defined as having worst case needs—that is, who are below 50 percent of the Area Median Income (AMI). The report found that 7.7 million renters suffered worst case needs in 2013, and 72 percent of households with incomes below $15,000 pay over half their income in rent.[2]

The astounding data released today suggests CMF can continue to act as an efficient use of federal resources and a highly effective tool to encourage private investment working to help address our nation’s housing and economic challenges.

A Beachhead of Bipartisanship: Accelerating and Expanding CMF’s Impact

The coming months are particularly important to the continued success of CMF. Currently, the CDFI Fund is administering two additional rounds of funding under HERA-directed funding.[3]

Given the climate on Capitol Hill, it’s rare to find a program with all of the elements that traditionally engender bipartisan support: a program that spurs economic growth, creates jobs, attracts private capital, quickly delivers impact in dozens of states and makes housing more affordable for families, seniors and veterans. The Administration and Congress have real opportunities in the upcoming FY 2018 budget process to improve the already-impressive Treasury Department implementation of CMF as currently structured and capitalize on the need to put the nation’s housing finance system on a secure, sustainable long-term platform to expand this effective program.[4]

While not directly subject to the annual appropriations process, CMF cannot succeed in isolation. It can function effectively over the long term only as part of an adequately funded federal safety net that increases opportunity for all. Unfortunately, the budget outline that President Trump delivered to Congress earlier this month, fails to meet that test. In proposing to eliminate key programs at the Department of Treasury and HUD — including the CDFI Fund’s linchpin grant making programs – the budget would deprive communities and families nationwide of the tools they need to thrive. CMF provides leverage that works for America’s most vulnerable families and America’s economy as a whole, but it relies on other CDFI Fund programs to work. LIIF stands alongside our community development and affordable housing allies – working in urban and rural communities nationwide – to preserve the CMF and all of these critical programs and meet the nation’s skyrocketing need for affordable rental housing for the poor.

[1] Shortly after HERA’s passage, the deepening housing and economic crisis drove the GSEs into conservatorship, and for six years—even after both GSEs had returned to profitability, the acting Director of the Federal Housing Finance Agency (FHFA) suspended payments to the CMF and NHTF.  In December, 2014, current FHFA Director Mel Watt resumed payments to both funds.

[3] In September 2016, the CDFI Fund announced $91.47 million in CMF awards to 32 non-profit organizations who intend to provide affordable housing and spur economic development in 38 states and the District of Columbia.  (HUD announced formula allocations of $174 million in NHTF funding to all 50 states and the District of Columbia in May, 2016.)The CDFI Fund and HUD are currently working to distribute the second round of annual funding to the CMF and NHTF under HERA.  Today’s data release by the CDFI Fund is part of the competitive Notice of Funding Availability (NOFA) process.

[4] Notably, both of the bi-partisan proposals to overhaul  the federal housing finance system during the 113th Congress—the so-called “Corker-Warner” and “Crapo-Johnson” bills introduced in the Senate—included substantial increases in funding for both the CMF and the NHTF.